Your Blog: 7 Tips to Stand out from the Crowd 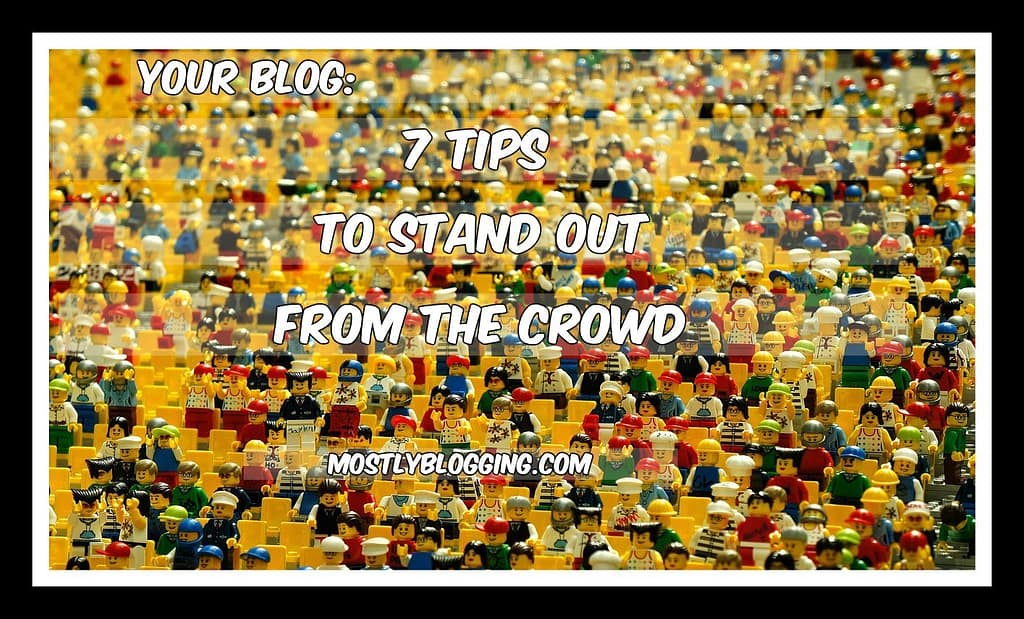 There are a lot of blogs out there.

In fact, there are many millions of posts put up every day. That’s a lot of competition.

And so, if you want to make yourself stand out and get over 100,000 followers, you’re going to have to take steps to make sure you don’t just stick head and shoulders above the rest, but preferably a torso as well.

But how do you do that?

Oh yes, you’re right, it’s vitally important. Without good content, you’ll not get any people to stick around. The thing is, great content doesn’t pull anybody in either because nobody will be aware of what is out there.

And so, content isn’t king, but more like a kingdom. And though it’s beautiful, if nobody visits it, you won’t get very far.

Yeah, you can get a bit of a following rehashing what everybody else is saying, but you’ll never get really far. Instead, you’ve got to have your own opinions. Don’t take this to mean that you’ve got to be controversial. That will only last you so long until people realize that you’re just saying stuff for the sake of saying it.

Instead, you’ve got to follow the data, like Study Hacks does. Here the site doesn’t have a problem arguing against public opinion, as long as it has the numbers to back it up.

Sure, creativity helps when you’re choosing what you’re going to blog about as the risk with writing about something everybody else writes about is that there is far more competition. That said, you don’t want to be too creative. After all, it’s very possible that the reason people don’t write in a particular niche is because nobody is actually interested in reading about it!

So, for example, you might have the only blog about cross-dressing North Koreans who write subversive poetry about the Kim dynasty, but you might find it tough to find a large readership. Mainly this is because there aren’t that many people out there who are interested in that kind of thing, but also because you’re going to have trouble reaching the few people that do.

Something mainstream with a twist

Instead, try taking something that is popular and then giving it a small twist away from the mainstream. That way you’ll be able to offer up something unique, while at the same time creating a much greater likelihood that people are actually interested.

Take this nerd fitness site, which pushes fitness into a new arena. Then there’s this site about how to freelance from the road, which combines remote working and travel. Or Skepchick, which is about atheism, secularism, and feminism – which seem like three things you could combine well, but nobody actually does.

Don’t just write stories. Yeah sure, some of your audience will enjoy it, but most of us aren’t just word oriented. We like visuals, movies, and more. And so, unless you want to leave the vast majority of your potential fans out in the cold, make certain that you’ve got other content.

This can be the occasional podcast, videos or slideshow of photos about something that is directly relevant to what you’re doing. Try different things and see what sticks.

Another great advantage of using different formats is that it will allow you to rehash a post that was previously successful in another format. So if you have a blog post that did well, try discussing it in a podcast, or creating an infographic about it.

Find other people that are close to your niche and begin a relationship with them. Perhaps you even want to create a share for share system, where they put up your stuff and you return the favor.

This simple strategy can be win-win, in that it exposes you to their fan base (and your fan base to their site, of course) and also allows you to fill more of your schedule with good content without having to go out of your way to look for it, which will give you more time for other things.

Don’t be afraid to reach out to people who are experts in your field. The best thing you can do is interview them for stories you’re doing – even if it’s just one quote. Then be sure to let them know that you’ve included their quote when the post goes up. If you’re lucky they’ll share your story with their network giving you immediate access to a lot of potential fans.

It also makes your story seem that much more authoritative, which is, of course, a great extra bonus.

And finally, make sure you work at it. Rome wasn’t built in a day. Most people, however, seem to think that blogs are things that either succeed or don’t in the first few months. That isn’t even close to the truth. There’s a good chance you won’t see any physical returns during the first year. That doesn’t mean the landscape isn’t changing in your favor, as more and more people hit your blog and you create brand recognition.

So don’t give up. Keep hammering away at it. As long as you’re growing, you’ve got a reason to continue.

About the author: Samantha Brannon is an entrepreneur and freelancer. She is also a co-founder and writing editor at Trust Essays writing service. Samantha loves self-education and rock music. Connect with her via Twitter.

Admin Blogger’s Commentary: Readers, too many bloggers consider abandoning their blogs. Please share, so they understand these tips can help them stand out in the blogosphere, beat the competition for readers, and get noticed.

How do you get noticed in this virtual jungle called the blogosphere? Do you have any advice for newer bloggers overwhelmed by the competition for readers? I look forward to your views in the comment section.

How to Have a Popular Blog and Should You?

5 Ways You Can Actually Be Sure of Blogging Success

How to Create Blog Content Your Readers Will Love– Guaranteed!