Many months have passed since GooglePlus shut down.

Are you looking for a Google Plus alternative?

These GooglePlus alternatives are all still thriving.

However, you should note:

While I stand by the research presented in this article, many people insist only Instagram is on the road to the stars as far as growth.

According to these social media experts, Instagram is considered the best replacement for GooglePlus.

On the other hand, I believe all of these would make a fine GooglePlus replacement. I should know since I use them all. 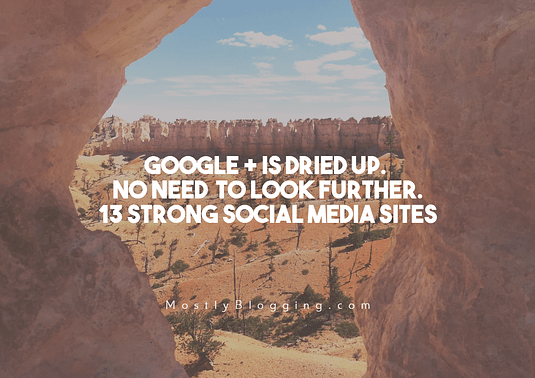 There have been three updates to this situation since the original publication of this article.

First, GooglePlus announced its closing down four months ahead of schedule due to a second data breach. The site will forever close its doors this April of 2019.

Next, GooglePlus now provides directions for saving your GooglePlus data.

In addition, MeWe (added below as a Bonus Tip) is providing a way for GooglePlus users to upload their content directly onto MeWe.

When I first started blogging almost 4 years ago, I enjoyed using GooglePlus.
I enjoyed the feeling of community the GooglePlus groups gave me.
I met new friends from all walks of life tied by a common thread– a love of blogging.
I promoted my posts on GooglePlus which has the potential to boost blog traffic.
My friends often promoted my posts and expert interviews in which I took part there. Their support further cemented our friendships.
Additionally, I was able to promote in GooglePlus groups which had the potential to attract targeted traffic. GooglePlus had all sorts of groups. I recall groups about technology, politics, and WordPress just to name three.
I say “recall” since I hadn’t been to GooglePlus in an extremely long time.
Apparently, neither had many people since the site announced its impending closure on October 8.
GooglePlus announced the site will close its doors come August of 2019.
Another reason actually precipitated the site’s imminent closure: a data breach involving 500,000 people.
Reactions on Twitter to the news of GooglePlus folding varied:
Google has apparently announced they are shutting down #GooglePlus leading thousands to ask the important question “Google+ was still around?”

And the main lesson for those end-users, like me, who invested thousands of hours helping to build services like Google+ and Google Reader? Never invest deeply in a platform that isn’t the primary focus of the company behind it.

So GooglePlus is dead now?

The news that Google is shutting down #GooglePlus is met with immense joy and sighs of relief from Social Media Professionals all across the industry who were only publishing on or monitoring the dead platform because it was a checkbox on an executive’s social strategy.

The #GooglePlus data breach is not really a huge deal. No one uses the platform.

What is Social Media?

Social media websites are online communities where people interact. These communities encourage the sharing of information. According to Wikipedia, “User-generated content is the lifeblood of social media.”

What is Social Bookmarking?

Social bookmarking sites can be used to save entire articles. You “bookmark” those articles to find again later.

This post recommends using both social media sites and social bookmarking sites as alternatives to using GooglePlus to promote your content.

13 Social Media Sites You Can Use as Alternatives to GooglePlus

Is Instagram growing? Is the sky blue? Do people need air to breathe?
Check out these statistics from September of this year:
According to BusinessofApps.com, “For the last 4 years, Instagram enjoyed a skyrocketing growth, from 90 million users who used the app each month back in 2013 to 700 million that use the app in 2017.”
In a recent interview about the best social media apps, 50 social media experts were asked, “Which social media app is the best?” Twelve either picked Instagram or mentioned Instagram in their response.
Consider these comments I put on Quora when someone asked if Instagram is losing popularity:
“Instagram has become a marketer’s playground. More and more people sponsor Instagram posts and Instagram gives thanks to those marketers with a boost in visibility. Win-win.

In contrast, according to Neil Patel, TikTok has yet to become a marketer’s playground since the site is still so new.

Although Gary V predicted Instagram’s growth would stabilize in 2020 due to the newness of TikTok, I heard Instagram is still growing.”

In September of this year, LinkedIn reported having 562 million users with 40% of that number active daily. There are many ways you can get exposure to your content on LinkedIn. One of those is to write an original blog post at LinkedIn.

Despite rumors that Medium was struggling to find its footing a while back, Medium.com is growing. In April of this year, Medium reported, “We’re now seeing not only more subscribers, but higher-percentage gains every month this year (accelerating growth).” 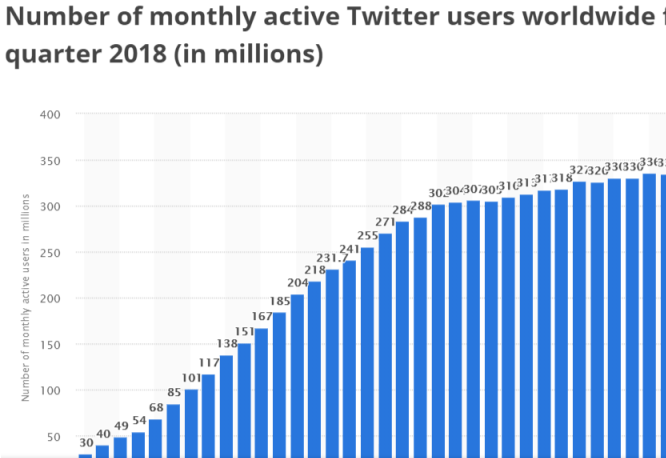 According to the screenshot, Twitter’s growth is definitely climbing.

Although I couldn’t find more recent growth stats, Scoop.it! ranked as the leading content marketing software in 2016 (Source). You can promote your links at Scoop.it! 50 times before you need to pay for a premium account.

Due to the money-making potential for you at this revenue sharing site, there is a great deal of “noise” at Steemit in my opinion. Steemit is a crowded, and therefore, popular site. Even if you don’t get traffic or even income, when you promote your content at Steemit, you’ll receive a link from a site considered a high-quality site by Google. This alone is worth the promotion for me. However, you can try to make money at Steemit as well as generate blog traffic and income from there.
It gets better: You don’t have to create new content. You can post any of your already published articles at Steemit.

According to TechCrunch.com, Snapchat reported growth in January of this year despite Snapchat’s online competition. Bloggers and marketers can use Snapchat to generate website traffic.

You can make money by using Snapchat as well as generate website traffic.

Quora is a question and answer site. I’m including it here since you can promote your content and interact with the site users. This was the criteria I shared above to be a social media site.

In January of this year, Quora boasted a 150% growth rate.

According to September 2018 stats, Reddit is continuing to grow. “Reddit has grown dramatically over the years. It has tens of millions of users, hundreds of thousands of subreddits, and it is always growing.”

Despite its reputation for considering bloggers spammers, it is possible to get the kind of blog traffic you want with Reddit.

Since the original publication of this article, I discovered MeWe, a new social media site, which offers itself as a Facebook alternative for people concerned their data is getting sold.

According to the Marie Haynes podcast, Google is developing a new social media site similar to Pinterest called “Keen.” According to Haynes, Google likes the way the site is collected at Pinterest and wants a comparable site that improves users’ ability to search.

Related Reading: If you need a Pinterest refresher, you will find one here: Is Pinterest social media?

Since the publication of this article, many new social media sites started.

For example, the social media site Huddol places an emphasis on personal growth and development.

Here is more information about Huddol if you’re interested.

Here is more information about websites that provide social pay if you’re curious.

Wrapping Up: Alternatives to GooglePlus

This post showed alternative websites where you can get exposure for your content. Not only did this post leave you with a list of options for promoting at GooglePlus, but all the social media sites recommended in this article are gaining popularity! You should be where your potential readers are.
Readers, please share. This way, if bloggers haven’t heard GooglePlus folded, they’ll know. In addition, when you share this post, people will have many social media sites they can still use for blog promotion.

How have you been doing since the Google Plus shutdown? Where you able to transfer your Google Plus account to Mix?

Where do you promote? Where do you find groups with like-minded social media users? Please answer in the comments.

Why is GooglePlus shutting down?

GooglePlus shut down due to poor management, a lack of focus, and several data breaches that occurred in 2018.

Are GooglePlus and GMail the same?

No. GooglePlus is a defunct social media site. GMail is an email service. Both are Google tools.

Which alternative to Google Plus will you pick? I look forward to your opinions in the comments section about the best Google+ replacement.