How to Quickly and Easily Write a Viral Blog Post, 12 Ways 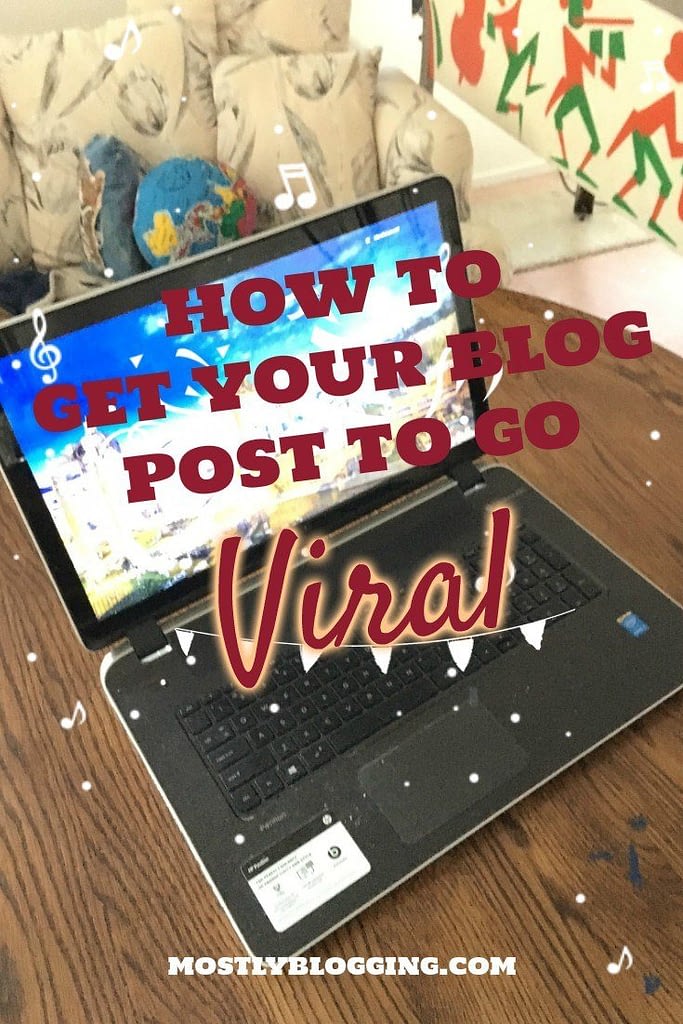 If yes, you know the thrill.

You know the adrenaline rush.

You know the feeling of disbelief that it couldn’t be happening to you.

However, it did happen to me on Saturday, March 18.

I am defining “viral” as receiving abnormally high page views.

My post 18 Facebook Groups You Should Join Today not only received abnormally high page views but received an unusually high amount of comments and social shares as well.

I did not know when I went to bed on the evening of March 18 that I would wake up to see my post going viral.

Saturday, the day it hit big, isn’t even my most popular day of the week.

On the contrary, I was so convinced my post offering the 18 groups I use for daily self-promotion on Facebook was not going to cause real interest that I kept it on the “shelf” for some time and did not publish it.

As it turned out, I needed to deviate from my editorial calendar and change article plans.

Within the week, my guest author had just written on basic blogging tips, which I’d planned to blog about on March 18. Variety is truly the spice of life, or at least in blogging it is. I wouldn’t want my readers to get bored with my content!

I had an unusually busy week that week and couldn’t compose another new post. That’s the beauty of the “shelf” post. It sits on “the shelf” until you need it. I needed a different article for March 18.

Although I did not predict my post about the Facebook groups would get unusually high page views, which is my definition of “virality,” in hindsight, the factors were in place that did make the outcome, a viral blog post, predictable. This post will discuss those factors.

As you can see, the Facebook groups post received 541 page views the day it was published. Look at the stats of the post one week later:

In the week since the post was published, it picked up an additional 744 page views. A week and a half later, the post received a total of 1,336 page views.

This screenshot came from totals for the last 30-day period. Look: the Facebook post gained an additional 969 page views more than my next best-performing post in the last month, 9 Tips for Writing Long-Form Content That Will Make You a Better Blogger. This shows that these are unusually high stats for me, my definition of “viral.”

Page views are continuing to rise on the Facebook post, and I predict this trend will continue. First, I can tell people are already finding the post on search engines. Next, the post is being featured at a multitude of linky parties since it received more clicks than any other post the week I promoted it at those parties. Furthermore, I will continue my promotion efforts.

What did I do? In hindsight, I can see the many factors that result in a viral blog post were evident in my article.

Look at the March 18 screenshot. I have double-digit page views coming from Triberr, Flipboard, and Twitter.

Bloggers complain they don’t have time to promote in all these places and spread their time so thin. However, it is necessary.

According to famed blogger Lilach Bulloch, “It is dangerous to rely on only a few sources of traffic.”

As you see from the top screenshot, Triberr contributed a portion of the page views on March 18. The following Monday, I received a notification that my Facebook groups post made Triberr’s Weekly Roundup of best blog posts. 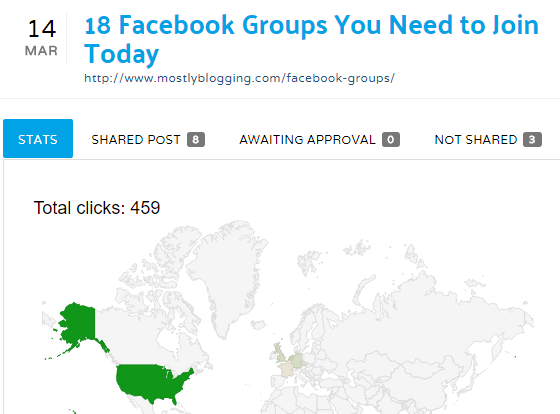 Triberr sent me a notice of congratulations when my post about the Facebook groups won their Monday Weekly Roundup. 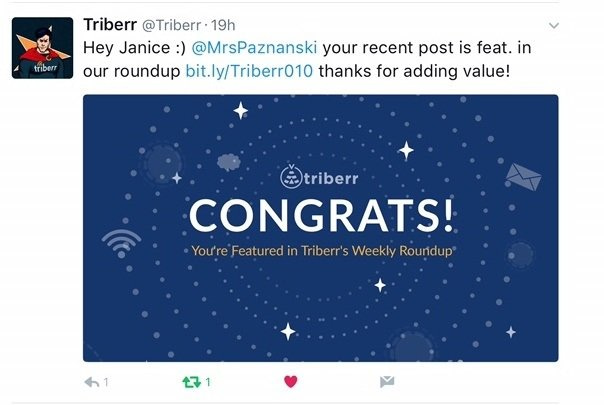 [Read: How You Can Increase Your Blog Traffic Using Triberr]

2. I promoted the post on social media sites repeatedly. On the ninth day after the publication of the post, I was still repeatedly promoting the post on Twitter. Due to my Buffer analytics, I knew which tweets about the post received the most attention on Twitter, and I simply clicked “rebuffer” on my Buffer app– quick!

According to CoSchedule’s Nathan Ellering, repeatedly posting your article on social media sites can boost your traffic as much as 483%!

3. I quoted blogging influencers and sent them my article.

I quoted blogging influencer David Leonhardt. He has more than 32,200 Twitter followers.

I sent him the article I cited him in, and he shared it on his Twitter feed, Facebook, LinkedIn, and ScoopIt. I received traffic from all those social media sites on March 18.

[Read: This is What You Should Do After Publishing a Blog Post]

4. My headline had urgency:

6. The post filled a need. Readers who commented explained they were interested in the article since they needed more self-promotion groups. People called my article “a resource” and commented about how nice it is to have alternative Facebook groups to join when the groups they are in are not a good fit for them.

[Read: How to Be Memorable in a Sea of Bloggers: Sticky Blogging]

[Read: How to Write Powerful Headlines]

8. I listened to the research. The research says Facebook users are online on Saturday. I posted about them and promoted the post about Facebook on Saturday.

[Read: How You Can Know What Day to Publish Your Blog Article]

9. I wrote content that was relatable. Thanks to the popularity of Facebook and blogging, I had two built-in audiences.

10. The article evoked emotion. My post gave bloggers hope that there are places they could promote their posts every day without being labeled “a spammer.” Jon Morrow coaches bloggers to play to people’s emotions like hope, fear, and frustrations.

12. I put my keyword “Facebook groups” near the front of the headline. If people don’t read the whole headline before deciding whether to click, they’d be sure to see it.

These statistics may not be high for other people. However, I have only been blogging about blogging for a little over two years.

In closing, the Incomediary blog explained, “Sometimes, contagious content takes you by surprise. Sometimes ‘ordinary posts’ do go viral.” That is what happened to me on March 18. If you follow the tips in this post, you can feel the excitement of having a viral blog post too.

Which tip will you incorporate into your blog posts in order to increase the probability of seeing a viral blog post?

I look forward to your answer in the comments section.