I Once Had a Dog named Nasty

Do you know the Maltese life expectancy?

The Maltese life expectancy is 12 to 15 years old.

Our dog Angel went over the Rainbow Bridge at the age of 10.

He died before the Maltese life expectancy due to heart problems. Angel’s heart was enlarged. 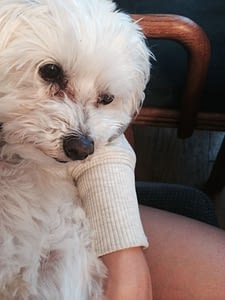 Here is a picture of my little dog Angel who has truly become my Angel!

“I once had a dog named ‘Nasty’,” I never said to anyone.

Yet, I suspect this time tomorrow that is exactly what I will say when people ask about my pets.  His name wasn’t always, “Nasty.”  Years ago, my then-boyfriend, now husband, Wayne, suggested I get a friend for my dog, Minnie.  It would keep her young, he explained.

Enter Angel, a sweet little boy.  A white dog has eyes that stain, unbeknownst to me at the time.  No matter who we asked or what we did to clean his face, it seemed to stay eternally black.  My daughter Hayley and I have very sensitive noses.  Hayley would complain that he smelled even dirtier than he looked, and no amount of baths would change that.  Hence, the name “Nasty” was born.

I have heard people advise against buying a pure breed, as we had done.  Something about health complications.  Angel proved no exception.
About two years ago he started making choking noises.  Listening to him try to clear the fluid that was building around his lungs was heart-wrenching.  The doctor prescribed pills that he simply refused to take.  We tried putting them in everything from pill pockets to pizza. We even took turns in hopes that he wouldn’t catch on to us.  Maltese aren’t supposed to be intelligent breeds, but Angel sure was.  (Writing about him in the past tense seems surreal.)

As his cough worsened, his bark decreased in volume.  The guttural was replaced with almost a melodic sound.

Over time, Angel’s shape became distorted.  His belly swelled with liquid.  After draining, his frame still seemed too large for his little head.  Eventually, passersby compared him to other animals, a llama, an elk, even a pregnant female.  As his shape changed, strangely my feelings for him morphed as well.  My love for him quickly grew to ten times what it had been.  I now proudly call him, “my little dog”.  (I’ve read articles on this topic; apparently growing closer to a dog one cares for is common.)

The day my daughter Hayley left for college, she made one request of me: “Take care of my dog,” she commanded.  As Angel’s health worsened, I resolved I would indeed take care of her dog.  When Angel became too weak to walk, I was his carrier.  Instead of my resenting his insistent begging to be carried, I went out of my way to transport him even going as far as to use a baby’s Snuggly.  When everyone in my family suggested euthanizing him, I was his staunchest supporter to be kept here among us.

Apparently, tonight is the night I wave the white flag (how ironic a color) of defeat.  Angel’s doctor has asked that he be permitted to put him to sleep, this time for good.  Two painful seizures are too many reasons for me to keep up a fight I clearly can’t win.  I must say goodbye to a dog I can’t bare to let go.  Am I fighting for Hayley? for my soon-to-be heartbroken husband? for my ego since I have insisted for so long Angel belongs here with us?

The manager of our vet’s office and my neighbor both recently asked me how we did it.  We took a sick little dog who was given six months to live and gave him a quality life for ten extra months.  How did we do it?  We did it with love.

This blog is a catharsis for me.  How do others do it?  Why is euthanasia okay for beloved pets but not for beloved human family members?

I look forward to your opinions about Maltese life expectancy.