How to Find Immediate Happiness 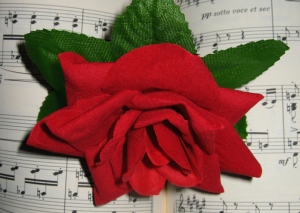 This photo evokes a contrast that my post conveys–joy and sadness existing side by side.

Yesterday was a horrific day, horrific.  I don’t mean it lightly.  I don’t use that word lightly.  Over 100 primary school children were murdered in Peshawar, Pakistan in an apparent revenge plot against their parents.  In addition, the Russian ruble fell to about half of what it was worth, and people saw their life savings vanish.

This post is designed to remind readers that there is also joy in the world in addition to horror, in addition to evil.  While music doesn’t even remotely make up for unmitigated terror, music brings a joy that exists in the world along with terror.

When I wrote, How to Find Gratitude (http://wp.me/p5jxvv-6T) and 3 Ways to Avoid Holiday Burnout (http://wp.me/p5jxvv-62), many people communicated to me that the holidays are a depressing time for them.  It is easy to wallow in self-pity.  The holiday season is supposed to be a time of merriment but many people feel despair.  This post is designed for them.  They know they should try to preoccupy their thoughts but can’t quite know how.  I suggest that solution is music.  By focusing on music, memorizing the words, understanding the lyrics, thoughts will shift from the self-absorbed to the creative.

My blogging friend has shared she’s looking forward to a better 2015.  She has a music blog called http://www.jinglejanglejungle.net.  I’d like to dedicate this post to her.

In addition to the horror that was the evening news yesterday, the band Green Day was inducted 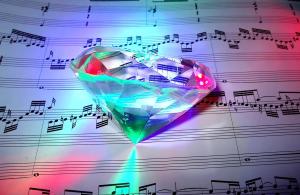 Like the other photo, this shows a contrast between different elements–the diamond and the sheet music. My post attempts to show how contrasts can exist simultaneously.

into the Hall of Fame.  Readers shouldn’t stick their heads in the sand; we should be informed, but we can focus on the good along with the terrible.

There was an episode of the old TV show Ally McBeal where Ally went to a therapist (played by Tracy Ullman) for depression.  Refusing to listen to Ally discuss her problems, the therapist insisted Ally’s spirits would be uplifted (and she gave her a money-back guarantee) if she played a song in her head instead of depressing thoughts.  Ally played the song Tell Him; sure enough the music filled her head, and the depressing thoughts were replaced.  If depressing thoughts fill your head, immediately substitute them with music.

Can I follow my own advice?  Let’s see.  Despite only being around for twenty-five or so years, Green Day was inducted into the Hall of Fame yesterday.

1 Reason Green Day Deserves Admission to the Hall of Fame

Their songs attempt to improve our culture.

“Throw up your arms into the sky, you and I.”  In other words, the people in the song will work together.  They will join hands, in peace.

Green Day’s merit, for me, is that they try to influence listeners to have a better tomorrow.  You, too, can have a better tomorrow if you work at replacing sorrow.  If you don’t, you not only face being morose, but you’ll be sad during a time others consider the happiest season of the year.

There’s a song called “Joy to the World”.  Let music bring joy to your world, today.

Readers, what works for you?  How do you lift your spirits at the holidays or any day?  I look forward to your views.