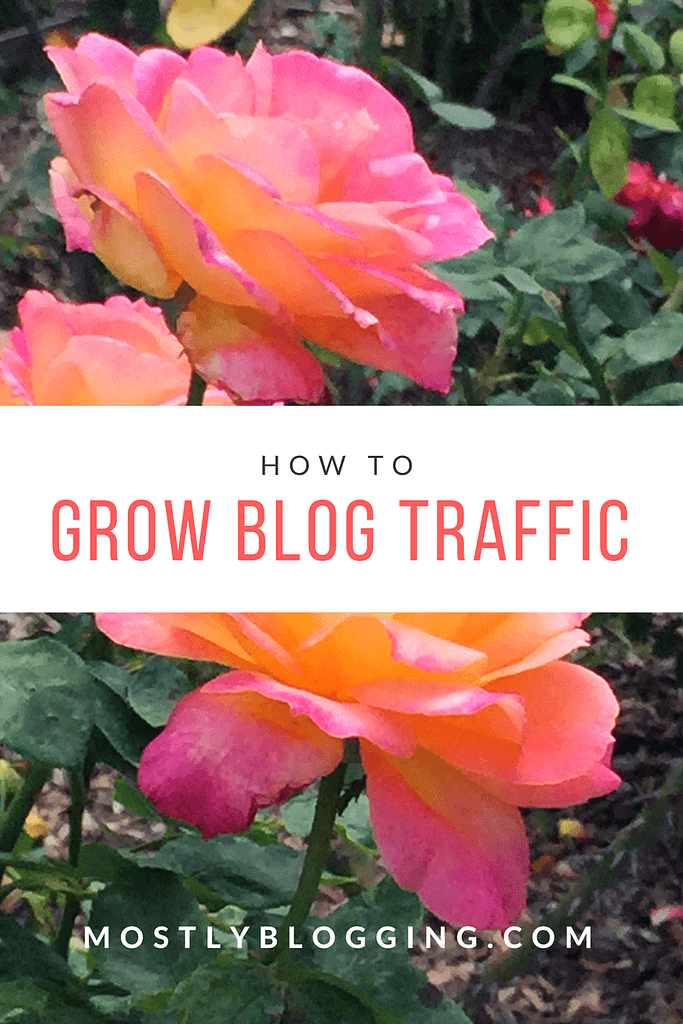 More than 3 million blogs posts have already been written today.

Standing out in this sea of content and getting blog traffic isn’t easy. If you run a blog, you already know by now how hard it can be to get traffic.

At the same time, blogging has now become crucial for attracting traffic and customers.

Instead of grinding away publishing post after post, there are a few growth hacking tactics you can use to radically increase your blog traffic.

In this post, I’ll show you 4 such growth hacking tactics you can use to 2x your blog traffic.

How to Double Your Blog Traffic

From a marketing perspective, however, “remarkable” content is essentially content that is 10x better than the competition.

This might be apparent in its length, presentation, depth, or persuasiveness.

This 15,000-word article on AI from WaitButWhy, for instance, is an example of “remarkable” content: 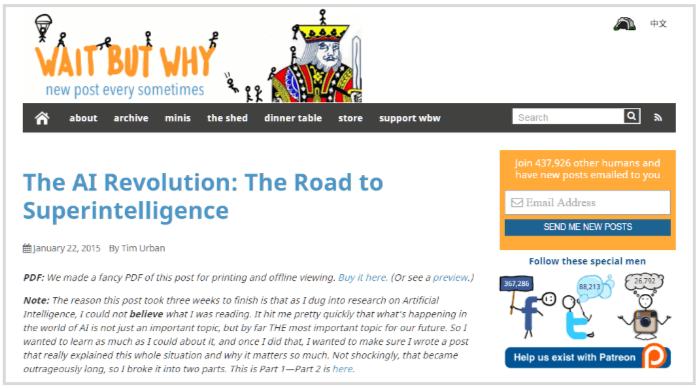 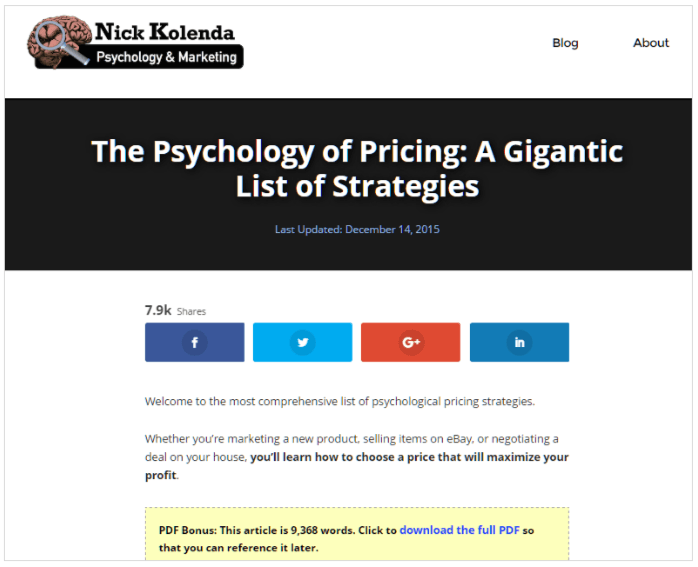 Think of this as not just a one shot growth hack but a long-term strategy to stand out in a crowded field.
Objectively, defining remarkable content can be hard; it’s just something you know when you see it.

[Read: This Is How to Drive Blog Traffic for Free, 10 Proven Ways]

However, there are certain components that go into creating content that is remarkable:

On an average, only 2 out of 10 visitors read the whole blog post. The majority of the readers will just read your headline and move on.

No matter how amazing your content might be, if you aren’t writing powerful headlines, you won’t get near your traffic goals.

Upworthy, for instance, famously makes their writers write 25 different headlines for every article before choosing the best one.

Ideally, your headline should include some form of numbers (such as a listicle). Research by Conductor shows that headlines with numbers get the highest shares: 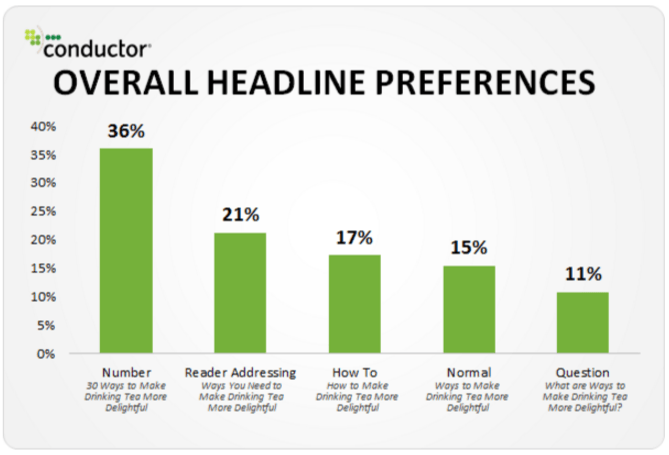 Your headline should also pack an emotional punch. CoSchedule’s research shows that headlines that evoke emotions get far more shares than bland headlines. 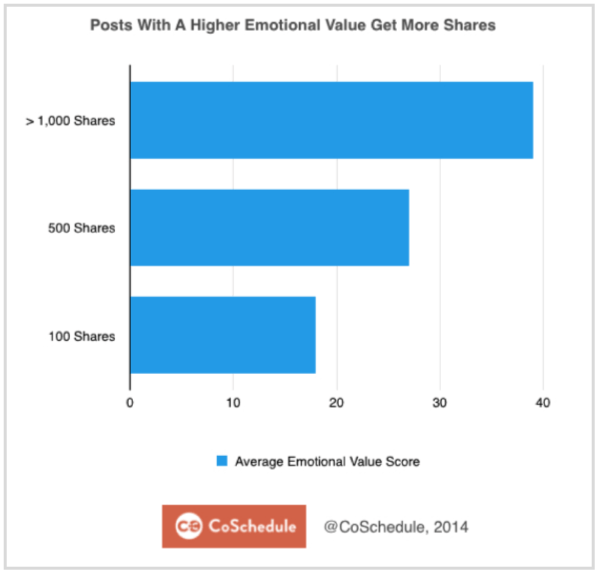 You can do this by using emotion-rich words in your headline, such as “amazing”, “powerful”, etc.
Take a look at this headline from SmartBlogger as an example:

Take a look at this headline from SmartBlogger as an example:

You wouldn’t want your writing to be “flabby” or “rob” it of its “power”, right?

Longer content has a positive impact on a page’s rank in the SERPs. According to Capsicum Mediaworks, the top-ranked content is around 2,450 words. Longer content also gets more shares, according to an analysis of 100M articles by Buzzsumo: 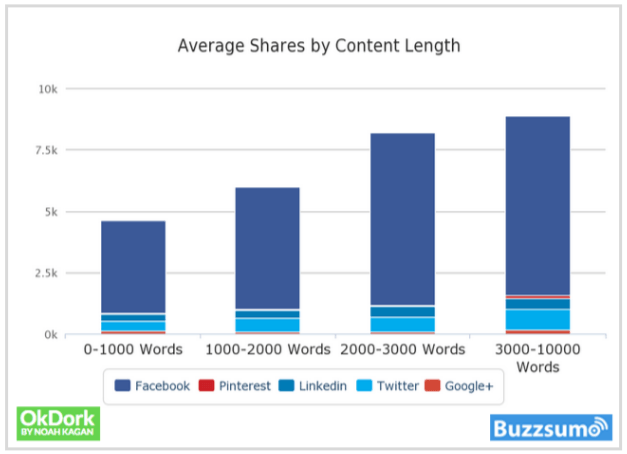 Visual content
Images, gifs, infographics, videos, memes: use them as often as you can in your content.

Several studies have shown we humans process visual data better. Even though we have five senses; sight, hearing, taste, smell and touch, 90% of the transmitted information in the human brain is visual.

Oatmeal’s comic on words you need to stop misspelling is a great example of visual content. As an article, the topic wouldn’t have been nearly as compelling as a funny, visually rich comic. 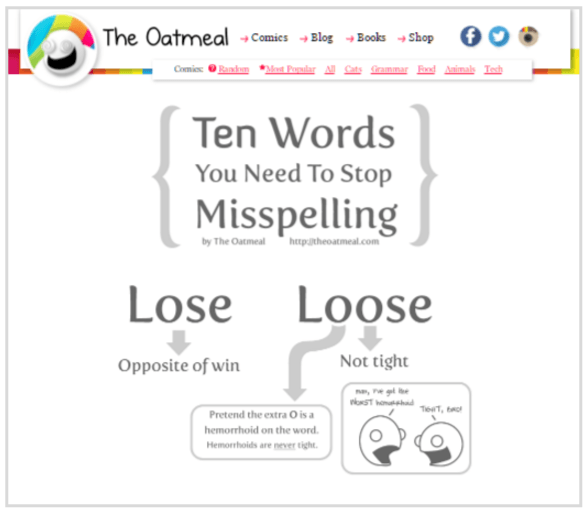 [Read: How to Use Visuals to Boost Engagement, 4 Ways]

A content upgrade is an extra bonus for your readers that is extremely relevant to your post. 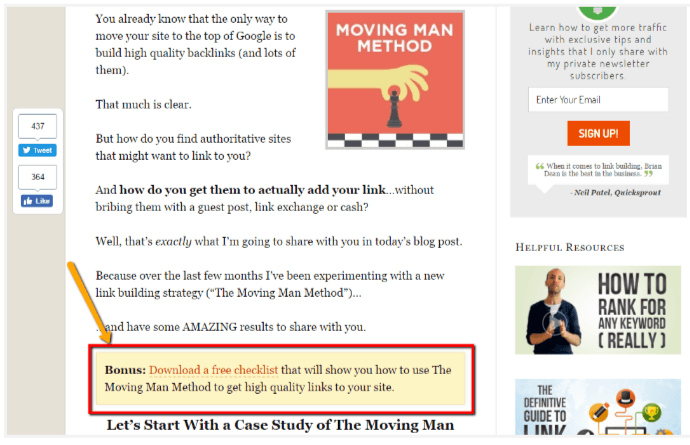 Content upgrades are usually given away to users for free in exchange for their email address. This helps you boost your email list.

Unlike conventional lead magnets, content upgrades work within the contextual flow of a blog post. That is, if a reader is reading a post about social media marketing, and you have a lead magnet about SEO, the reader is less likely to be interested in the offer.

However, if you have a highly specific offer such as a checklist on social media marketing, your offer is more contextually relevant to what the reader is already reading, and hence, you get higher conversions.

[Read: 7 Ways to Take Charge of Your Readership Problem [Incentives]]

You might feel that it’s “spamming”, but if you want more traffic, you really should be sharing your content on social media multiple times.

Essentially, this concept describes the time it takes for a post to reach only half its original audience.
Back in 2013, the half-life for Twitter was calculated to be as low as 18 minutes. 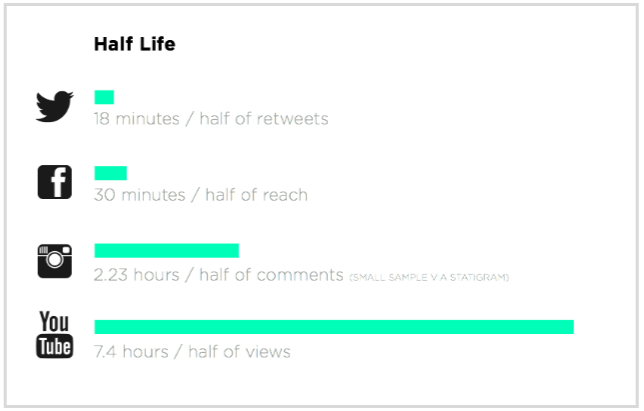 According to Garrett Moon, re-posting on social media is the best way to hack your content and double the traffic. The best way to go about this is to develop a social sharing schedule using tools like Buffer or PostPlanner.

Of course, how many times you share the same update will depend on the network itself. Sharing the same update multiple times on Twitter is fine, but if you do it on Google+, you’ll just be spamming.

Base your posting schedule on the half-life seen above. This means resharing your Twitter posts at least every week, your Facebook posts every 4-6 weeks, and Instagram posts every 8-12 weeks.

4. Reach out to influencers before and after publishing

This tactic requires time and effort, but when done right, it can give you a massive boost in traffic and shares.

Essentially, you can break this down into two steps:

For example, Alex Turnbull of GrooveHQ reached out to influencers to ask for their opinion on a new blog post with this email: 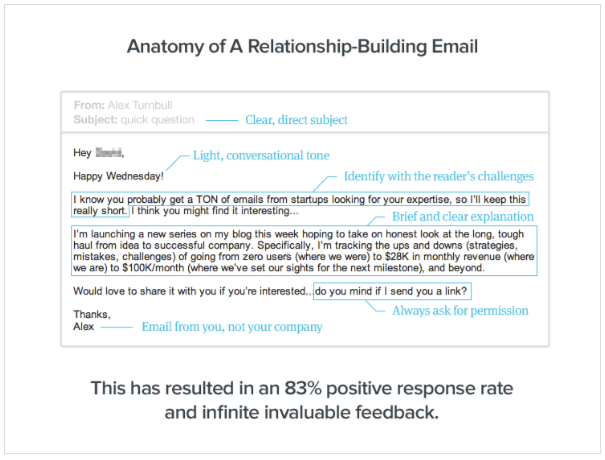 And here’s the email he sent after they showed interest: 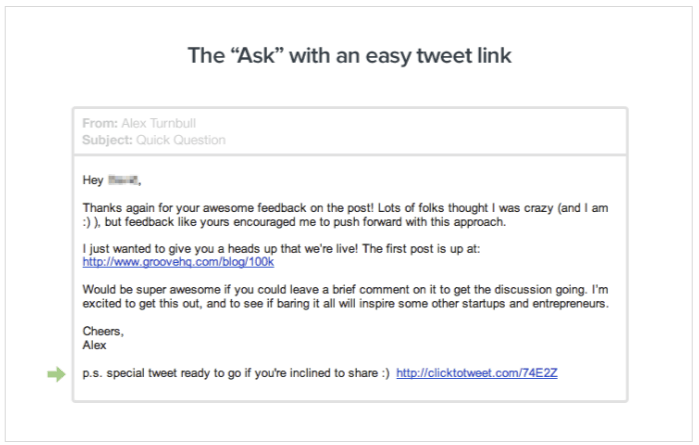 Notice that he included a pre-populated tweet within the email for easy sharing.

Doing this alone helped Alex get 1,000+ subscribers from a single post.

[Read: How to Quickly and Easily Write a Viral Blog Post, 12 Ways]

Growth hacking can be a hard nut to crack, but if you can get it right, you can effectively double your traffic.
Follow these four growth hacking tactics above to get started. As you gather data and learn more about your target audience, don’t be afraid to test out new ideas to create and distribute your blog content.

Khalid Saleh is the co-founder and CEO of Invesp, a leading provider of conversion rate and landing page optimization solution and Figpii, one of the most comprehensive tool that offers everything you need to increase the conversion rate of your website.

Host Blogger’s Comments:
Readers, please share these growth hacking tips for doubling your blog traffic so other bloggers become aware of how effective they are.
Which traffic generation tip did you think is the most valuable? Are you using any of them already? How useful are they in growing your blog traffic? I look forward to your views in the comments section.