A Complete Guide to Understanding "Salmon Fishing in the Yemen" 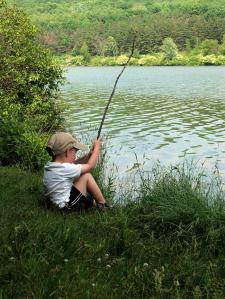 On Thanksgiving evening, while waiting for dinner to be served, I struck up a conversation with my son-in-law who explained the tenets of Buddhism.  As a student of Buddhism and someone proud to be called a Buddhist, David explained the concept of karma.  As a teacher of the origin and spread of the religion, I already knew.  Thus began a fascinating conversation about the religion that arose in ancient India long ago and the concept of karma that its followers believe.  Little did I know that I would be viewing a film about the very topic just one night later.

Don’t get me wrong.  “Salmon Fishing in the Yemen” is not a documentary.  On the contrary, on the surface it’s a love story.  The late author Paul Torday wrote the novel, loosely based on a true story, in 1997.

There are three areas one needs to understand in order to make sense of the film.  The first is plot.  (If I am beginning to sound like a licensed English teacher at this juncture, it’s because I am one.)  Ewan McGregor plays Fred, a stuffy fish expert who is assigned against his will to help a sheik bring salmon to the Yemen, a desert area, so he can fish there.   Believing he is helping his people, the sheik, played by Amr Waked, invests a fortune into the project.  The always-charming Emily Blunt plays Harriet, a British investment consultant, who goes along with them while her boyfriend is missing in action in Afghanistan.  Romance ensues.

Most importantly, viewers need to know this movie, despite its title, is not about fish, fishing, or even the Yemen.  It’s about karma.  Case in point: when Fred saves the sheik’s life, the sheik explains to Fred that since there is karma,  Fred’s heroic actions will be rewarded.

The next concept in my “Complete Guide” is theme.  Torday’s story tells many themes.  Generally, an author has a character speak the theme if it is not implied.  Torday speaks through Waked’s sheik.  The sheik is the character who explains that there is karma.  Although Blunt’s character asks at one point in the movie if there is a higher plan, it is the sheik who explains that a divine plan exists.  The age-old controversy of science versus faith is explored.  Although Fred initially bases his opinions on facts and research, he ultimately agrees with the sheik that one should have faith.  Because there is a higher plan, have faith and be patient.  The patience will pay off.

Next, symbolism is explored in the film.  As soon as the sheik explains that patience will be rewarded, he catches a fish and explains to Fred (and the viewers) that it is a sign that faith will be rewarded.  Fish seem to function as a favorable symbol.  Contemplating divorce, Fred sees fish and has conviction.  Whether one can go against their DNA is asked several times.  Fred goes against his DNA and has the courage to leave his wife.  The fish go against their DNA and swim upstream.  Neither event was predicted by the other characters who explain those actions are caused by DNA.

Water is a symbol as well in “Salmon Fishing…” The film repeatedly discusses water’s uses such as drinking and swimming.  Harriet explains some people consider water bad luck.  Even a sandwich is a symbol in this movie.  When McGregor’s shrewish wife makes him one, the camera pans in on a disgusting looking sandwich that falls apart in McGregor’s hands.  He puts it in the garbage foreshadowing the marriage he is about to throw out.  However, when Fred gives Harriet a sandwich, she embraces it, foreshadowing the relationship with Fred she is about to embark on.

All in all, it was a pleasant way to spend two hours.  Rent the DVD.  Go ahead and test the waters.  Then, come back and tell me if you agreed with my analysis and opinion of the film.