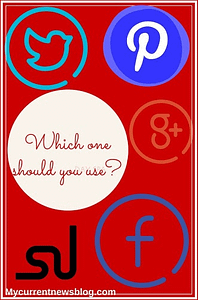 So many social media choices can be confusing.

Are you an effective blog promoter?

How do you decide which social media to promote your blog on?

Do you flip a coin?

Lately, you’ve been reading about an additional choice to use for blog promotion, StumbleUpon.

This post will help you decide which form of social media will best help you promote your blog.

After reading my recent post How to Make Traffic Skyrocket With StumbleUpon, readers have expressed concerns over the lack of time to promote their blog posts on all the social media choices afforded them.

Note these comments from readers:

I have a life, a very busy one… I just don’t have it to give to give more time to another source…

…there’s only so many places one can be in.

My latest post 5 Powerful Ways Busy People Can Promote Their Blogs explained how to use Viral Content Buzz to expedite that promotion by only going to one site which will enable you to promote on five different sites in just one place.

Once you are there, which should you pick to promote your posts?  All? None?  A combination thereof?

Use these guides to help decide which social media site is right for you.  Then, in the conclusion, read which site or sites I recommend.

Wherever you go to look at your stats, look at your referrers.  WordPress users: Go to Site Stats, Referrers, Summaries, click All Time.

When deciding which social media site to promote to, you should continue doing what works for you–promoting to your top referrer to your site.

For me, that is Facebook.  My referral traffic coming from Facebook is double that of my #2 referrer.

I attribute this to several factors.  First, WordPress has a Facebook sharing button.  I share my posts on my both my stream and my blog page.

Next, I am a member of twenty-six Facebook groups.  Twenty-three of them allow me to leave links to my posts.

My experience is not isolated.  According to Shopify, Facebook dominates as a source of social traffic.  Shareaholic released a report which found that Facebook traffic to blogs were four times greater than traffic to blogs from Pinterest.

WordPress has a Google+ sharing button which my articles automatically post to.  In addition, I am a member of 79 communities at Google+.

What is so helpful about the groups at Facebook and the communities at Google+ is that there is a group for whatever my blog topic is.  Although my niche is blogging, they each have a group for subsets of blogging.  For example, I plan on putting this post in the Facebook social media group since that is the topic of this blog post.

In contrast to Google+, I feel I put great focus on using Twitter to promote my blog, yet Twitter is coming in as my third best referrer behind Google+.  That shows how effortless promotion on Google+ is.

Pinterest is coming in as my next best referrer.

I highly recommend Pinterest to refer traffic to your blog.  According to AhaNOW.com, social media is becoming a visual medium.  People love to see images more than text… Because the brain processes visual information 60,000 times faster than the text.

I just joined four additional group Pinterest boards within the last two weeks, so I expect my referral traffic coming over from Pinterest to rise.

Sue Anne interviewed successful bloggers about how they used Pinterest to drive traffic to their blogs.  The most common answer shared was the use of Pinterest group boards.

In the interview, Kristen @ Musings Of An Average Mom explained, “My best Pinterest tip would be to join group boards, especially if you haven’t built up a large Pinterest following yet.”  Many respondents echoed her answer.

I need to use Stumble upon more consistently. It did bring my site a huge spike in traffic one day which was awesome!

Although StumbleUpon is my eighth-best referrer, search engines come in as my second best referrer.

My guest author, who explained he received 40,000 pageviews from StumbleUpon, had the same experience.

As can be seen, StumbleUpon has great potential in driving referral traffic to your blog.

Wrapping Up: How to Be an Effective Blog Promoter

In conclusion, the commenters quoted in the post expressed concerns that blog promotion to all these sites would be time-consuming.

I beg to differ.  First, WordPress has automatic sharing buttons that I have enabled to post to these sites for me.  I don’t have to do anything at all!  The only time promotion consumes time is when I opt to post my link in unique groups or communities.

Not every post is relevant to each community, so I don’t post in 79 Google+ groups each time I publish, for example.

Next, all these sites bring traffic in varying degrees.  Because I desire traffic for my blog, I want to know I tried every method available to me to promote my blog.  For this reason, I say, try them all.

Readers, if you think others could benefit from these social media tips, please share so another blogger who reads this becomes a more effective blog promoter.

What social media have you found to be most beneficial in bringing you traffic?  I look forward to your views.